GARRETT DENNIS
​NEWS
​
EDITING SERVICES
In addition to my writing, I'm also now doing some COPY EDITING and LINE EDITING on the side for fiction writers, at very reasonable rates (starting at $0.01 USD per word). Contact me at GarrettDennis.Author@gmail.com if you need this service and you want more info.
​
BRANCHING OUT (September 17, 2019)
If you're wondering when the next Storm Ketchum Adventure will drop, the answer is not for a while yet. I decided to do something different and write a horror novel. I'll be publishing it under a pen name to avoid confusing readers, but I'll announce its publication to PORT STARBIRD VIP LIST members when the time comes, in case anyone wants to read something new in that genre.
A NEW AUDIOBOOK (December 14, 2018)
Well, as usual it took longer than I thought it would - but TALES FROM PORT STARBIRD is now available in audiobook format! It's available at Amazon, Audible, and Apple iTunes. Go to the BOOKS page or the FREE AUDIOBOOKS page if you'd like to grab yourself one for that next big road trip!
ANOTHER NEW RELEASE! (June 25, 2018)
​Not only did I release those two Tales I mentioned below - I also wrote another one! It's called ROUTE 101, and it's only available in my new collection, TALES FROM PORT STARBIRD. This book includes all of the Storm Ketchum Tales, plus ROUTE 101, and it's available now everywhere. Happy reading! 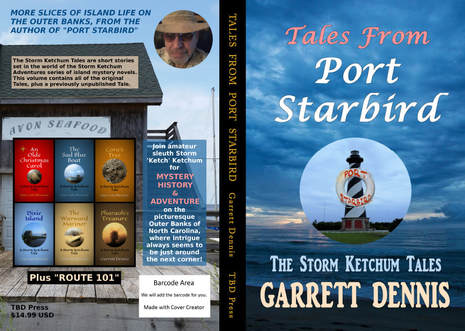 THE PORT FEE: PRE-ORDER NOW FOR JUNE 1 DELIVERY!
The Kindle version of my new Storm Ketchum Adventure, THE PORT FEE, is now available for pre-order. You can pick it up for th...e low introductory price of $0.99, but don't delay - that price will only be good through launch day (June 1). Here's the link: http://bit.ly/1NF2Cj4
Good guys and bad guys, boating and diving, a dash of romance, and a mysterious otherworldly presence all come together in THE PORT FEE, Ketch's most challenging adventure to date. Act now, and join Ketch and his Kinnakeet Boatyard friends for another engaging and quirky adventure in the picturesque Outer Banks of North Carolina!
COMING SOON: This e-book will also be available on non-Kindle platforms (Nook, Kobo, Apple, etc.).
The Reluctant Reporter (November 16, 2015)
​I noticed I don't publish too much news here (that's right, I don't come here all that often either!). Most of my action seems to have gravitated to the Facebook group I started for readers and OBX fans. I also (very) occasionally send an update to those on my e-mail list. I'm on Twitter as well (@PortStarbird), but you can't say much there. The bottom line seems to be, if you want to know more about what I'm up to,  you  might want to consider joining my " ~ PORT STARBIRD ~ " group on Facebook. Be there or be square! :)
Port of Refuge! (April 19, 2015)
~ The e-book version of Port of Refuge, the second Storm Ketchum Adventure, is now available for pre-order, and the print version is coming soon. Here's the pre-order link: http://bit.ly/1DUSfAj
~ Finally... I wondered if I'd ever get this one done! A couple of the characters decided to deviate from my original plan along the way; but that's okay, I'm not holding it against them. :) I also got a few too many threads going at the beginning this time, and it took me a while to wrap everything up in a satisfactory manner. And not just in terms of time - this book is about 20% longer than Port Starbird.
~ And now, on to the next one. But wait - there's still some production, distribution, and marketing to be done; plus spring is here and I'm already behind on the yard work... Well, I'll find a way. You know what they say, if you want to be sure something will get done, give it to a busy person. :)
Some More News (February 2, 2015)
~ PORT STARBIRD was featured in the November 2014 issue of 'BOATING TIMES Long Island' magazine. Here's a link to the online version of that issue if you want to check it  out:
http://boatingtimesli.com/NY/2014/11/
~ The book was also featured in the January 2015 issue of 'Red City Review' magazine, as one of their contest finalists. Here's a link to the online version of that issue: http://www.blurb.com/books/5890033-red-city-review
~ I'm working hard on finishing the second Storm Ketchum Adventure, PORT OF REFUGE. I hope to make it available for preorder by the end of March 2015.
Writing Competitions & Sales (December 16, 2014)
~ I entered PORT STARBIRD in several writing contests this past year. Here's how we made out:
2014 Red City Review Book Awards - FINALIST
2014 Best Kindle Books Awards - SEMIFINALIST
2014 Amazon Breakthrough Novel Award - QUARTERFINALIST
~ Results are still pending for a couple of other contests.
~ Meanwhile, there are now over 75,000 copies in circulation worldwide since March 2014 (mostly e-books, some trade paperbacks). My friend Gee Gee Rosell, owner of Buxton Village Books on Hatteras Island in the Outer Banks, has been moving a goodly number of those paperbacks. Thanks, Gee Gee!
Port Starbird News (July 6, 2014)
~ The Port Starbird trade paperback is now available for purchase on Hatteras Island in the Outer Banks, coincidentally where the story is set.
~ Visit Gee Gee at Buxton Village Books in Buxton, North Carolina, if you happen to be in the neighborhood sometime!
SUBSCRIBE & CHOOSE A FREE E-BOOK!​​
Click below if you'd like to occasionally receive exclusive news & updates, special offers, and chances to win prizes.
Powered by